Irene Bambrough, sixty-two, was the perfect example of a lucky patient. Her liver cancer had been diagnosed in August 1995, so she had put herself on the drop-routine for the BWT parasite program and the kidney herb recipe. She left her home in a northern climate to stay with a friend in Arizona who had plastic water pipes. (This is probably what saved her life.) When she arrived at our clinic from Arizona, her initial toxin test was already Negative for isopropyl alcohol, CFC’S, and copper, though she still had copper at the liver. She was off to a good start, but was still Positive for fiberglass, aluminum, arsenic, cadmium, thallium, patulin, aflatoxin (very high), and salmonella bacteria.
She wore full dentures. (This is probably what saved her life again.)
On the day she arrived, November 24, she was given these instructions:
(1)change her metal glass frames to solid plastic-no metal, and washed carefully before wearing them. (2) Use no hygiene products from the drugstore, such as band aids or cotton swabs. These have mercury and thallium residues. (At that time we did not suspect leftover bits of amalgam in her jawbone as a source of mercury and thallium or other metals; in retrospect, such tattoos were the probable source of her thallium.) (3) Take Lugol’s for Salmonella, four times a day as written in the cancer program. (4) Take black walnut tincture extra strength, 2 tsp. daily in a 1/2 glass of water; (sip it) for 4 days. Then zap. Also, take 7 cloves and 7 wormwood capsules the first day. (5) Get a blood test. (6) Get an ultrasound of the liver.
On November 28, she returned. She had accomplished everything without help! We reviewed her blood test. Besides her anemia and her extremely high white blood cell count (15,800), her liver enzymes were too high, especially the GGT. Her LDH was somewhat elevated indicating tumor activity, as was the alkaline phosphatase (both due to dyes). Her triglycerides and cholesterol were rather low, showing she was losing her good nutritional status. Calcium was ominously high at 10.5, showing there was a problem in her thyroid gland. The high potassium level was further evidence.
Indeed, she had been born with a cyst on her thyroid gland and had part of it removed. She also had radium treatment for it. Now she was on Synthroid tablets daily. (Her third piece of luck was that her thyroid tablets were not polluted with isopropyl alcohol.) She was started on the freon removal program. She was given coenzyme QIO to kill tapeworm cysts or other stages that inhabit every tumor. The plan was to search for surviving tapeworm stages the next day. She was also given silymarin tablets to improve her liver function. She was scheduled for three IVs a day, containing glycyrrhizin, laetrile, and vitamin C (50 gm daily). The next day, the surviving tapeworm stages in the liver were searched for from a set of 33 slides. She still had: Taenia solium cysticercus, Taenia solium eggs, Diphyllobothrium erinacea, Moniezia expansa eggs, and Taenia solium scolex.Evidently coenzyme Q IO was not effective, at least not at this dose. We decided to go back to our previous tapeworm treatment, a big dose of black walnut tincture extra strength. She was given 8 tsp. in water, sipped in 1/2 hour, and another 8 tsp. two hours later.The next day, November 30, she was tested for tapeworm stages again. Four out of the five tested Negative now (the fifth, Taenia solium cysticercus was omitted in the test; this slide was temporarily mislaid). She had also gotten rid of her aflatoxin by avoiding all grains in her diet and eating no nuts. 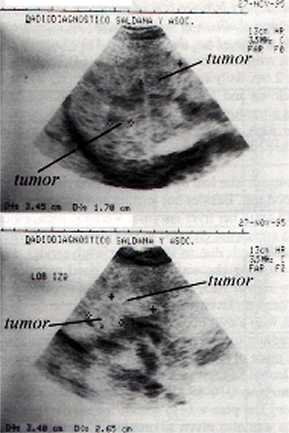 She missed more days — precious IV days. Arriving on December 4 she was tested again; all tapeworm stages were still Negative. Aflatoxin was still Negative. Even copper was now gone from her liver, although no EDTA was used in her IV to chelate it out.
We discussed her liver ultrasound done on November 27. It was abysmally bad. There were tumors strewn about like trash on a windy day. There was no way to count them. Yet she smiled blithely as we spoke about them. The radiologist simply described them as “multiple liver metastases.” Only two were measured in each lobe. Why couldn’t she take our program more seriously? It would be a certain fatality. Should I send her to a different cancer doctor, one who would frighten her with threats and vivid descriptions of what it’s like to die of cancer? Tubes everywhere, pain in spite of morphine, a distended belly, no appetite, etc. I decided against it, for a few more days. Other doctors would manage to keep her more dutifully getting her IVs, but the same IVs would be polluted with isopropyl alcohol and E. coli — the risk seemed greater than the benefit.
I concluded (wrongly) that she must still have a tapeworm stage, but not a variety I had tested for. She was given another two sets of black walnut tincture extra strength, 8 tsp. each, one hour apart. (This was her fourth piece of good luck; in our ignorance we maximized her treatment, instead of minimizing it.) Then she zapped. She was perfectly cheerful about this, without a snippet of a complaint about the taste or the cost. With equal cheerfulness, she announced she was leaving in a few days for home! 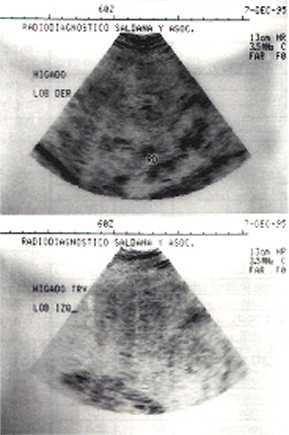 Dec. 7 R and L liver lobes with no tumors
We quickly taped the negatives onto the windows for all of us to review. There was nothing that could be identified as a tumor. The texture was bad. Possibly a CT scan of the liver would have shown more detail. But the overriding truth was she had made tremendous improvements in the past two weeks and would survive. She could count on living again. How did it happen? She had missed most of her IVs, and taken very few supplements. (Nor did she observe a malonate-free diet because we didn’t know there was malonic acid in food at that time.)
But her husband had a new refrigerator for her for Christmas, all fiberglass was sealed up tightly, the water pipes had been changed — it was a case of true love.
A new blood test rewarded her for her family’s efforts. The RBC and WBC were now perfect! The liver enzymes had improved! But LDH had crept up to 238. Did this reflect new tumor activity or the burden on the liver from opening tumors (releasing their Sudan Black and lanthanides)? The tell tale sign of aflatoxin was present in the bilirubin.
It too, had just passed the 1.0 mark. We carefully warned her about moldy food. The calcium level had dropped, iron had risen, and potassium was normal again.
And she was obviously much better nourished, judging by the triglycerides and cholesterol. But we had mislaid her file and had nothing to compare her results with as we reviewed her blood test. We couldn’t make a strong case for her staying longer for more treatment. And she was off again to care for her home and family. She had made a success story out of an imminent tragedy. 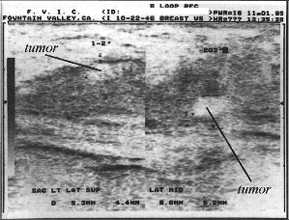